The ageing population is one of the greatest challenges for western societies. Demographic trends are mainly driven by two factors: First, relatively low birth rates in most European countries lead to shrinking populations. Second, an increasing life expectancy increases the proportion of older people in a given population. How strongly this affects the demand for long-term care (LTC) depends on the main determinants of the increasing life expectancy. Despite the increasing social and economic role of LTC, our existing knowledge of the determinants of demand for, and supply of, LTC as well as of the macroeconomic importance of LTC is limited.

In one of our research projects (Karlsson et al., 2016) that is related to population ageing we provide evidence on how health care spending evolves in the years before death in Germany. For this we use claims panel data from a big German private health insurer to provide detailed individual-level evidence on medical spending between 2005 and 2011. Our main findings are that health care spending more than doubles between ages 50 and 80 and that spending is very concentrated: the top 10 per cent of all spenders are responsible for 53 per cent of all medical spending in a given year. There is a 50 per cent probability that individual expenditures lie in the same quintile of the distribution after five years, for both very-high- and very-low-cost individuals. Medical spending in the year of death is six times higher for the deceased than for everybody else in that year and accounts for 7.9 per cent of lifetime spending (see Table 1). Females use more office-based care and have higher spending at younger ages, whereas males have higher spending at older ages, particularly for hospital care, and die younger.

Table 1: Spending in the last years of life as a percentage of lifetime spending (Karlsson, Klein, Ziebarth, 2016).

In a closely related study (Karlsson et al., 2017) we measure the composition and magnitude of medical spending in the last years before death for different countries (Denmark, England, France, Germany, Japan, the Netherlands, Taiwan, the United States, and the Canadian province of Quebec). This large comparative study reveals that medical spending at the end of life is high relative to earlier ages but the last twelve months of life only make up a modest share of aggregate spending in all countries. In contrast, the last three years of life account for a large share of medical spending suggesting that high aggregate spending is due not to last-ditch efforts to save lives but to spending on people with chronic conditions. Figure 1 shows for which categories of health care money is spent on in the last three calendar years of life. 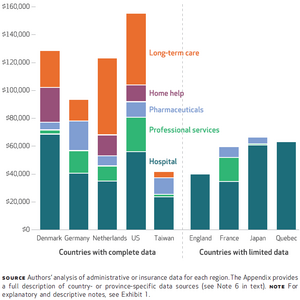 As indicated above, population ageing not only affects medical spending, but can also influence long-term care needs. In Costa-i-Font et al. (2016) we explore how the market for informal care changed during and after the Great Recession in Europe. As informal care (i.e. care by family members, friends, charities) is the most common source of long-term care, and since the Great Recession affected unemployment and net wealth, this is of particular interest. Using data from the Survey of Health, Ageing and Retirement in Europe (SHARE) we find evidence of an increase in the availability of informal care after the economic downturn. The result is driven by increased supply of persons not living with the care recipient.

Martin Karlsson with Norman Bannenberg and Hendrik Schmitz: The Economics of Long-Term Care. In: Oxford Encyclopedia of Economics and Finance (forthcoming) (2019).