The process of globalisation which gained momentum during the last decades of the 20th century has led to a degree of interconnectedness between people throughout the World, which is unparalleled in human history. The globalisation process – characterised by increased international trade, capital and investment movements, migration between countries and an increased exchange and dissemination of knowledge – has brought many improvements to people in developing and developed countries alike. However, the deepening integration of world markets also increases our vulnerability to infectious disease. It is the aim of this project to analyse the economic implications of diseases such as the 1918 Spanish flu pandemic.

The Spanish flu pandemic travelled the world between 1918 and 1920 and claimed a death toll large enough to have had repercussions on the economy. Estimates range between 50 and 100 million victims worldwide (Johnson and Mueller, 2002). Figure 1 shows the number of deaths for the Swedish population. We focus on Sweden since the country was not participating in the Great War, and thus, there was no other mortality shock coinciding with the pandemic. 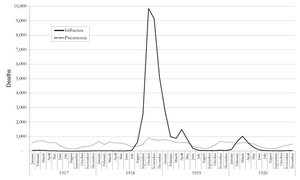 In a first paper (Karlsson et al., 2014) we focus on the effects of the flu on Sweden’s economic performance. We exploit seemingly exogenous variation in incidence rates between Swedish regions to estimate the impact of the pandemic and find that the pandemic led to a significant increase in poorhouse rates. There is also evidence that capital returns were negatively affected by the pandemic. However, contrary to predictions, we find no discernible effect on earnings. A summary of our results is presented in Figure 2. 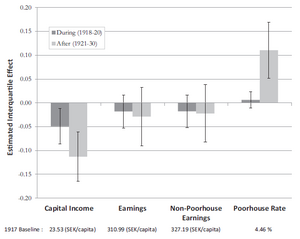 In a second paper (Boberg-Fazlic et al., 2017) we explore the effects of the pandemic on fertility. A central line of inquiry in economic and demographic research concerns whether, when, and why fertility changes together with mortality. The event of an epidemic can cause major losses to a household and in a globalised world, where communicable diseases cause numerous deaths and where epidemics can spread quickly across countries, these questions seem especially relevant.

Focusing on conceptions as our fertility measure, we find that the influenza pandemic was associated with a substantial reduction of fertility rates in the short and long term. Moving from the lowest to the highest quartile of health districts (in terms of adult flu mortality) is associated with a decline in the monthly conception rate by around nine per cent in the long run. Concomitantly, we do not find any evidence of short- or long-term replacement fertility. If anything, an elevated child flu mortality was associated with reductions in fertility. We do however find some evidence of postponement fertility in rural areas: fertility rates here tend to rebound in the period immediately after the pandemic. This positive effect is driven by high quality parents. Married couples, higher socioeconomic groups and mothers who already have at least one child contribute disproportionately to the short-term increase in fertility. In the longer term these temporary increases are swamped by the overall tendency of heavily affected areas to experience lower fertility rates. Table 1 shows fertility effects from flu morbidity. 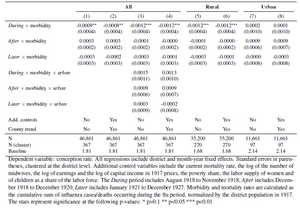 The project “Epidemics and the Economy - An Economic Analysis of the 1918 Spanish Flu Pandemic in Scandinavia” was funded by the DFG from 2014-2017. Research on this topic is carried out in collaboration with Therese Nilsson (Lund University), Stefan Pichler (ETH Zürich) and Nina Boberg-Fazlic (Southern Denmark University).