Statutory sickness insurance protects employees against temporary income losses that arise from workplace absences due to illness. However, it is important to evaluate whether shirking or presenteeism dominates in behavioural reactions. Even though it is very hard to provide reliable evidence in any direction, the answer to this question is critical in evaluating the effects of public policy reforms: if benefits are too restrictive, employees may go to work even though they are sick (presenteeism) and spread contagious diseases. On the other hand, if benefits are too generous, employees may call in sick although they are healthy (absenteeism/shirking), which leads to direct costs. Hence an efficient sickness insurance system minimises both phenomena.

In this project we evaluate the effects of two different reforms affecting sick leave schemes in Germany. The first reform in 1996 reduced the sick pay employees are entitled to claim from 100 to 80% of gross wages during the first six weeks per sickness episode. The second reform, which will be presented in some more detail, increased statutory short-term sick pay for private sector employees from 80% to 100% of foregone gross wages starting in 1999. The treatment group thus consists of all private sector employees while the control group incorporates public sector employees and the self-employed—all those who definitely did not experience a legal change in their minimum sick pay levels. Figure 1 displays the average number of sickness absence days for several pre- and post-reform years for the treatment and control group. 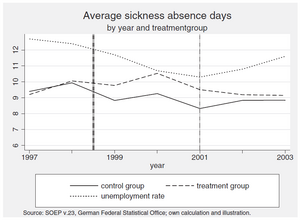 Using SOEP survey data and parametric, matching and combined methods we estimate intention-to-treat (ITT) effects and average-treatment-effects on the treated (ATT). Our results suggest that employees adjust their sick leave behaviour according to theory when there is a change in the sick leave scheme. The reform increased workplace absences by at least 10% or 1 day per worker per year and ATT effects are about twice as large as ITT effects. Table 1 shows intention-to-treat effects for different estimation procedures. Furthermore, we show that heterogeneity in response behaviour was of great importance and that there is no effect on employee health, a finding that supports a shirking explanation.

The project was carried out in collaboration with Nicolas Ziebarth from Cornell University.